Aftershock’s newest musical is back for round two, at the New Jersey Fringe Festival! Come witness a truly unique piece of musical theatre, in which the choices you make change the outcome of the performance! When six passengers on a cruise ship crash on a mysterious island, they’re put through a series of ordeals to the end of most of their eventual deaths. But which one will live all the way until the end? Which one will survive… the musical?

A wristband for the Fringe gets you into as many performances as you like, for just over $21-24 for the day, or $39 for the whole weekend! There are going to be a ton of great shows, but there will also be NINE performances of Survive: The Musical. So if you want to see this show nine times to see how it’s different EVERY time, that’s an option for you too! For more information, and to purchase wristbands, visit http://www.eagletheatre.org/jersey-fringe/ 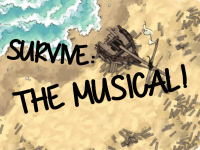