Improv with a Twist

A day of comedy where
the audience makes the rules!

Aftershock is having an improv show! This show will be double-featured along with the NJ Fringe-renowned Plot Twist.  This night of comedy will be one for the ages (or at least the months), and we want you to laugh!

Do you like to laugh? Do you like watching people make fools of themselves? Have you ever watched and enjoyed an episode of “Who’s Line is it Anyway”? If you answered yes to any or all of those questions, then Aftershock’s Improv Show is for you! This hilarious cast of improvisers has been practicing their trade weekly for months, in order to bring joy to your lives.

Plot Twist is a piece of completely interactive theatre! At the end of each scene, the audience will get to decide what our cast does to advance the plot. Once the whole thing plays out, the cast resets from square one, and the audience gets to pick a different path to follow for the next run through. What will become of our hero? Will you guide him to victory? Or will his defeat be on your hands?

Both shows will be presented three times.  And because the audience has input into each show, each performance will be different.  So … we’re offering multi-show specials!  See one performance and get a steep discount on one or two of the following performances!  Come see one performance, and get into the next one (or two) for just $4 more!

To take advantage of this special:

1) Buy your first ticket online.
2) Enjoy the show!
3) Bring your ticket back for the next show and buy another ticket at the door for just $4!

(valid only for the original ticket purchaser – no fair sharing tickets!) 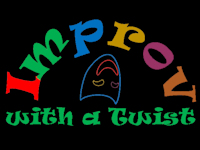