Meant to Be Auditions

Meant to Be is a whimsically dark musical about a serial killer fighting to win his true love. Follow Maxwell and Sophia as they take a journey of romance, murder, secret agents, criminal organizations, ghosts, and so much more! This production will be a staged reading, and run one night only during the Ritz Theatre Company’s June Festival, on June 26th.

Auditions are walk-in at the Ritz Theatre in Oaklyn, beginning at 6:00PM. Get there early to get out early! We may ask you to stay for a short time after your audition to do a reading from the show.

For those who have seen Meant to Be before, you’re stepping into a remastered show – the plot has been polished to a shine, and characters have been shifted to make for a story that keeps you on the edge of your seats the whole time!

ROLES
Maxwell – Baritone – A socially awkward, love-struck serial killer, and the narrator of the show.
Sophia – Soprano – The object of Maxwell’s affections. Smart and strong, thrust into a situation she has little control over.
Kurt – Baritone/Tenor – A serious man who doesn’t always realize how goofy he is. Liaison between the CIA and Sophia, and the most dangerous man in the world.
Daisy – Mezzo – Sophia’s best friend and confidante. The party girl who never grew out of partying. Flirts with every guy she sees.
Mark – Baritone – Sophia’s serious, long-term boyfriend. Appears in dreams and visions after his untimely death.
Heather – Alto/Mezzo – The leader of a dangerous crime syndicate. Fights, dies, haunts Maxwell.
Various – Many – Other roles require only a few scenes or less in the show, so some cast members will wear many hats. Being in the ‘ensemble’ means you’re going to have a busy show.

This show contains violence, excessive foul language, and strong suggestive themes. May not be appropriate for children. Must be 16 or older to audition. 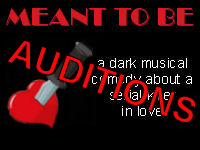