Roll With The Punchline

Do you like time travel, murder, crazy neighbors, books, telephones, existentialism, and theatre so original that some of it is written before your very eyes? If you said yes to any or all of those, Roll with the Punchline is THE show to catch this season! Not convinced? Keep reading for more info on the specific shows you’ll be seeing!

Roll with the Punchline is a brand new collection of hilarious comedic works, to be presented twice on April 22nd at the Ritz Theatre in Oaklyn! The first show will be at 2:00PM, the second will be at 7:30PM, and tickets are $15. Tickets available online now!

These shows are appropriate for Teens and Adults

Party/Time – This fast paced comedy by Joshua Kurtz tackles an issue we’ve all had to think about at one point in our lives. What if we had to travel back in time to kill ourselves so that we never invented time travel? What if that happened during a high school party, while the parents were away, and everything that could go wrong did go wrong, and we had to deal with a perfect storm of characters that makes the situation horribly difficult? If you’ve ever been worried that this might happen to you, Party/Time might give you some insight on how NOT to handle that delicate situation.

House Warming – Dylan Glick’s whacky comedy puts a modern spin on the TV Sitcom style we all know and love. Moving into a new apartment for college should be easy for Neil. But that’s not taking into account the fact that his roommate is running hours late, that at least two of his exes are giving him trouble, or that his new next door neighbor may just be a serial killer. Still, Neil’s aspirations are fairly simple. Sit down in peace and quiet, and read a book. How hard could it be?

Please Hold – In Joshua Kurtz’s first foray into Absurdist Comedy, watch as our “hero” deals with the neigh impossible task of waiting on the line for a representative to become available. But the longer they’re on the phone, the more we begin to wonder – is there a representative at all? Why are they calling? Are they calling? Who are they? Who are we? Please Hold gets really weird really fast, and I can’t make any promises that it won’t mess with your head.

Improv Show – If you’ve seen an Aftershock Improv Show before, let me promise you that this will be nothing like those. Not just because the content will be different because it’s all improvised, but because we’re not just playing games this time. We’re putting on a show! Using a prompt from the audience, we will create an entire short comedic show, that will keep both you and us guessing until the hilarious end! Don’t miss this one – it will literally never happen again! 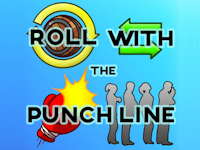