Those of you who have been friends with Aftershock Entertainment since before it was actually Aftershock, remember Josh’s first Musical, True Villains!  Well now it’s coming back, new and updated.  For those of you who are newer to our group, True Villains is a musical comedy with a twist.  The story is told from the side of the Villains, not the heroes as most stories go.  We follow the adventures of Sebastian, a hero-turned-villain, and a whole cast of colorful bad guys to fall in love with.  Based on Joshua Kurtz’s long running web comic by the same name, the musical brings these quirky villains to life.

In the world of True Villains, the supernatural puts an extreme emphasis on natural. Magic, monsters, demons and golems run rampant in the world, and what we would consider in this world to be impossible would be considered in the True Villains world to be tragically quaint. Warriors of God known as Paladins search through the land, imbuing righteousness on all they see fit, dark sorcerers and demons search about looking for more things to destroy or people to kill. There is never a dull moment.

True Villains is a classic tale of magic and heroism told from the villains’ point of view. In this brand new musical comedy, we follow the trials and tribulations of Sebastian Jalek, an up and coming adventurer who winds up working for the bad guys. Sebastian joins Xaneth Antaris, an infamous demon, and is sent to destroy a village. At said village, he meets Xaneth’s other partner, Elia, a necromancer, and later, Sebastian’s love interest. Sebastian destroys the town but winds up saving the life of Mia, a small girl who lived there, for sheer pity. Sebastian convinces Xaneth to let him take Mia on as his apprentice so that Xaneth doesn’t kill her. However, when a renowned hero, Gray, takes it upon himself to rid the world of Xaneth and all associated with him, the good days of the bad guys seem doomed to a hasty end. Will evil be able to prevail against good?

This performance of True Villains the Musical is being produced by Mainstage Center for the Arts in association with Aftershock Entertainment.

Check out these clips from the last performance! 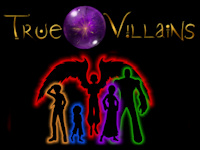