Almost All My Heart 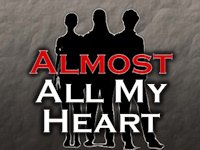 Sam was not a hopeless romantic. Not until the day she met Lilah, and fell head over heels.

Will Sam and Lilah fight through the challenges and stay together? Or are there forces in this world stronger even than love?

Amnesia grabs a hold of Shortmann after a fatal hit and run incident between himself and the Stoop Guy. Trying to piece his thoughts together, he runs into his friends dealing with the after effects. His best friend blames himself; his wife has shut herself off from the world; his other friends are too busy bickering with each other; and the town he lives in has been plagued with a drug epidemic. But the unpredictability of life allows Shortmann to persevere and uncover the truth. All because Stoop Guy left his stoop. Drug use, animosity, egotism, greed, love and death combines and explodes into an ending that challenges the meaning of human life.

“Time’s always moving forward. It never looks back. And if we sit here wishing for things to be the way they were, we waste the valuable time we have to get where we need to be.”

More about the Festival

All 16 shows take place from August 5 through 7th in downtown Hammonton, within walking distance from the Eagle Theater.  Please not only bring your friends to the Festival to support this great endeavor but make sure you see both of our pieces!

More information is available at http://www.jerseyfringe.com/

This is a Jersey Fringe event.  Each Play is a production and property of their respective contributors.